In a world in motion, changes in business also mean changes for people. We met with Christoph Treier, sport psychologist, leadership and business coach, to discuss how companies and managers can help their employees cope with times of change.

1. Be clear on the reason for the change – where is the improvement?

2. Communicate the reason for the change (be transparent and honest)

3. Communicate the reason for the change (be transparent and honest)

4. Communicate the reason for the change (be transparent and honest)

5. Communicate the reason for the change (be transparent and honest)

6. Involve the entire organisation in the change

Swiss-born Christoph Treier has spent his career helping people to reach their potential and tackle their fears. Many know him from the world of sport, where he travels the globe to coach the minds of professional athletes, such as Finnish world rally champion Marcus Grönholm. However, in addition to sportsmen and women, Treier also works with business leaders, politicians and entire organisations facing challenges in their work, often because of large strategic changes. “There are many parallels to be drawn between sport and business. Our drivers and motivations are very much the same in both.”

Whether coaching an athlete or a business organisation, Treier’s work starts by talking to and getting to know his students. What business are they in or what sports do they do? In the case of athletes, Treier aims to find out the motivation behind the athlete’s ambition. Are they driven by internal factors or perhaps external ones, such as wanting to prove something to others? In business organisations, Treier’s work is often commissioned by the management team or HR, but he quickly moves down the hierarchy to get everyone’s view of a situation: “I try not to be too marked by the management, as they have a natural tendency to see things their way. I often notice a discrepancy between the management team’s view of something and the personnel’s. To be of any real use, I must understand the personnel’s feelings and experiences. What the management initially presents to me as a problem, usually in the end turns out as a by-product of the real issue.”

Over the course of his 25-year-long career, Treier has seen many organisations go through change processes. As a coach he shares his experiences and inspires his clients with examples of how others have tackled problems. A compelling example of a change comes, however, from Treier’s own life: “Already as a young kid I wanted to help others, and people came to me whenever they had a problem. In high school I knew I wanted to be a psychologist. I wasn’t too good at maths but figured I wouldn’t need it. In my second year I got a cold shower when our guidance counsellor pointed out that it would be difficult for me to be accepted to study psychology at university, as the first two semesters are pure statistics studies.” Sobered by this realisation, Treier’s mind switched from hating mathematics to loving the subject and immersing himself in it. “When I knew I had to understand maths to follow my dreams, I started learning. It became interesting and I picked up new things without having to try. That was the first time I experienced how much attitude matters. I had found my reason to want to change.”

That was the first time I experienced how much attitude matters. I had found my reason to want to change.

When moving organisations through large strategic changes, leaders often fail to communicate the necessity of a change. Why is the change an improvement to the current situation? What is the idea behind it? The management often knows exactly where the organisation is headed and expects others to know too, without fully explaining the reason for the change. “Studies show that we need to communicate and show the necessities of a change in four to five different ways to have everyone in an organisation on board. A giant info session is not enough. Sometimes CEOs or HR Managers feel like they are nagging about the same thing over and over, but that repetitiveness is really needed. You can hardly expect people to agree to a change if they don’t understand the reason for it,” Treier explains and encourages transparency and honesty in the communication process: “Many structural changes are made because of economic reasons. If that is the case, say it! Don’t make up excuses. People are smart, they know if the real reason behind a change is to save money.”

We need to communicate and show the necessities of a change in four to five different ways to have everyone in an organisation on board.

Treier refuses to agree with the statement that people generally react negatively to change. He believes a strong reason and a promise of improvement will get you far in a change process. “Often when someone has a negative reaction to change, it means they are actually quite content with the situation they are in. If things are pretty good as they are, why would they need to change? A dissatisfied employee, on the other hand, will welcome any change to their situation.” Treier gives an example of a life-altering situation people rarely mind: “Moving is a huge change in our lives, but most often we see it as a positive thing, because when you move, you know it’s a step towards something nicer: a bigger house or a city with new opportunities. You yourself are involved in the whole moving process and see a clear improvement to your current situation.” 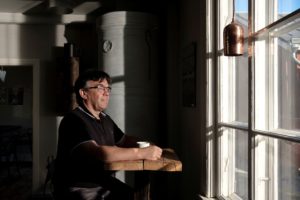 Even when organisations involve their employees in change processes they generally see four types of people: innovators, early adopters, late adopters and strict opponents. The innovators will welcome change, often because they have nothing to lose and see personal benefits from it. “There is a risk that managers focus on these employees while forgetting the rest.” The second group are the early adopters, who fairly quickly switch from resistance to compliance. The late adopters, in turn, are slightly more stubborn than the first two groups but will come along after some time. “With these people, managers need to be patient and not push them too hard. However, when a person finally embraces change, they don’t go back.”

The final group of people, the strict opponents, will refuse change and claim it has negative effects on quality, customer service, internal communication, corporate culture or something else. “These things might be true, but most often the strict opponents are simply afraid. They are afraid of what the change will personally mean for them: Is their competence enough in the new organisation? Will they lose their job? They will mask their personal fear as a worry for something else in the company.” Treier sees that managers need to understand and address the different reactions to fear. “It’s important that companies lead the change. Following processes and steps is one thing, but organisations need to take care of their employees’ feelings and not leave them adrift. Of course, people will react to change, they’re human! My job in an organisation going through change isn’t done before there is a designated person responsible for following up on the personnel’s reactions to it.”

The only constant is change

Treier uses the car industry as an example of a deep-stirring change: “Today every car manufacturer develops electric or hybrid engines. It’s the future. However, within every car manufacturing company there are opponents to electric engines. These guys are afraid, because their strength lies in gas and diesel engines. They know all the ins and outs of this older technology and now suddenly their expertise isn’t valued
anymore. Naturally they fight the change, while others, knowledgeable in electric cars, applaud it. Managers in these companies need to relieve the uncertainty and make their employees feel safe.” Treier notes, however, that a technological revolution, being an external change, is generally easier for people to accept: “With external imperatives the ‘why are we changing?’ is often easier to understand and therefore people come around quicker. It’s hard to argue with the fact that battery technology or renewables are better for our environment than burning fossil fuels.”

Treier concludes: “In a change process, it’s important to understand what the challenges are. For one thing, there has to be a good reason for the change or else people won’t accept it. Secondly, leaders need to clearly communicate its improvements to the personnel: what’s in it for them? And finally, negative reactions are usually based on personal fears, which need to be addressed in their own right. After all, we’re all just people.”

Gate by gate towards excellent projects

Project execution with Citec’s new gate model is like playing croquet – you systematically work your way to the finish line, one hoop at a time. The difference to the garden game, however, is that when projects cross the finish line, all the players are winners. Read More

How can we improve?

How to find out if the customer is satisfied when the project is over? Citec developed an effective tool to gain a better picture of customer satisfaction. Read More