Citec founder Rune Westergård strongly believes that cleaner technology can save the planet and he has even written a book on the subject. “Technology is not the enemy of nature, quite the opposite”, he states.

“One planet is enough” was published in English during autumn 2017 by Springer Nature. The book explains how climate change and environmental threats can be tackled using smarter technology. 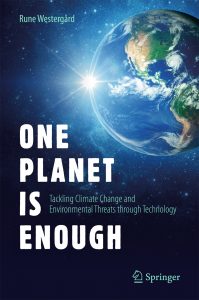 Many people might simply want a new Tesla – the worlds most advanced electric car – because it is a status symbol to be seen in. Citec founder Rune Westergård, however, is different. He bought an electric car because he wants to practise what he is preaching.

Westergård is convinced that the answers to solving the environmental threats facing the planet today are to be found in new and better technologies. He is also convinced that consumption is needed to make all technology cleaner. In other words, we have to buy new things like electric cars.

“I strongly believe that the sustainability issues facing the world today can be dealt with by using smarter technology. Technology is not the enemy of nature, quite the opposite”, Westergård states.

He has come to this conclusion after years of thorough research. Since selling his majority share of Citec a few years ago, Westergård has had time to engage in his greatest passion, which is reading and writing about technology. In 2016, he published a book on the subject, which was recently published in English by the renowned international publisher Springer under the title “One planet is enough”.

Using examples from history, Westergård shows that humankind has repeatedly believed that doomsday was imminent, although things always later turned out for the better. Improved technology has saved us time and time again. The ozone layer didn’t disappear and the European forests are doing well today. And thanks to the mobile phone, there is no longer a copper shortage, which was the case when fixed lines were used.

“The mistake most people make is that they look at the world in snapshots, although the world should be seen as a sequence of moving pictures. Only then can you see the progress”, explains Westergård.

Today, we are at the dawn of a new technological shift, where the car – which has dominated and polluted the world for the last century – is being replaced by a new type of vehicle – an electric one. Westergård believes that the major breakthrough of the electric car will come sooner than we think. 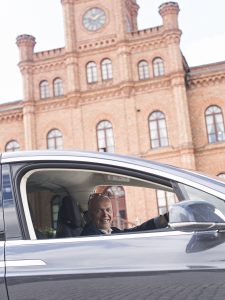 “Some people claim that electric cars are not sustainable because so many resources are used when building them. Once again, this shows a lack of understanding about the technical evolution. Today’s electric cars are not perfect, but in order for them to develop, somebody has to buy them. There is no technical development without consumption.”

This is one of the central ideas in Westergårds book: unless we consume, we are stuck with old and polluting technology. As all companies want to save money, there is a natural and inevitable trend towards reducing the consumption of energy and materials per item.

It is only because of the yuppies of the 1980s – who bought some terribly expensive and hugely inefficient mobile phones – that most people in the world today can afford cheap and functional phones. When it comes to technical evolution, early adopters are therefore extremely important.

“For me, buying an electric car was a natural choice as I’m convinced that, in the end, this does more for the planet than many other things commonly considered sustainable.”

Westergård takes another example from history. Bicycles were considered a waste of time and resources when first developed in the 18th century. The young men riding them, the early adopters of those days, were considered lazy. However, the bicycles of today have become symbols of a sustainable lifestyle.

“History has shown that the luxuries of today are the commodities of tomorrow.”

“The funny thing is that history has shown that the luxuries of today are the commodities of tomorrow time and time again. That goes for mobile phones as well as for bicycles, fridges and a whole range of other useful products.”

Westergård is therefore very sceptical towards the common perception that climate change should be battled by reduced consumption. According to him, less consumption means that the natural development towards ever more energy efficient items is being slowed down.

“Without consumption, the electric car will remain a luxury item for much longer.”

A promise of a sustainable future

One of the fastest growing economies in the world, India, has started a race to become a role model in clean energy usage. Read More

A partner in times of change

Dear Reader, The global engineering service market is undergoing remarkable changes and is estimated to reach almost 900 billion US dollars by the end of 2018. This huge market is shaped by drivers such as global energy investments, EHSQ requirements, engineering outsourcing and a strong increase in renewable energy (especially solar and wind), which puts […] Read More

There are many myths regarding electrical cars, but only few of them are true. Read More

How to capture carbon

What’s the best way to capture CO2 from a waste-to-energy plant? Citec is looking to answer this question in a recent study for Norwegian EGE. Read More

Digitalisation – a way of life for Citec

What does digitalisation mean for an engineering company? According to Citec’s CIO Jaakko Rintala, it means a great deal and will mean even more in the future. It’s about helping customers to succeed by providing optimised solutions with the most efficient engineering. The trend is actually ancient but developing rapidly at the moment. Read More