Financing a power plant is like doing an enormous jigsaw puzzle. It usually takes years before all the pieces have fallen into place.

Who buys a power plant?

Utilities, which are usually state-owned. The trend has long been that utilities finance power plants increasingly less themselves.

Private companies, who need the power for their own operations. For example, mining companies or factories.

Most of the power plants built today are financed in this way.

There is a great demand for electricity in the world, and there are a lot of different players willing to finance power plant projects. However, few people are able to master the difficult art of tying the whole package together.

One person who is familiar with the challenges, though, is Terje Gresslien, Director for Project Development (small picture) at Jacobsen Elektro. He has had several years of experience in financial modelling for power plants.

“What makes it so complex is the great number of different parties involved and all the negotiations and contracts between those parties”, Gresslien explains.

The main part of a power plant is typically financed by different kinds of lenders; commercial banks, development banks, export credit agencies and private equity investors. In addition to these parties, there is of course the buyer, that is, the utility for whom the power will be produced. There are also local authorities involved all along the way, as well as guarantors. When the construction of a power plant is started somewhere in the world, it is actually the result of several years of hard and persistent work.

The background to today’s complex situation regarding power plant financing can be found in history. The ones needing a power plant – mostly state-owned utilities – rarely have enough capital to finance the planning and construction of it. To combat this dilemma, a model was formed in the late 1980s, whereby companies offering power plant solutions also arranged the financing. This became known as an IPP model, which stands for Independent Power Producer.

“For Wärtsilä, this model was a way to enter into the power plant market”, explains Clas-Eirik Strand, who is a board member of Citec.

He once participated in the development of Wärtsilä’s power plant business, and today works for Jacobsen Elektro.

Like Wärtsilä, Jacobsen Elektro arranges financing for power plants in order to ensure their deliveries.

“For us, the primary objective for arranging the financing is to ensure that our EPC projects are realised. In some cases we also operate the power plant after it has been completed, although that is not our main aim”, says Terje Gresslien.

During the process, a so-called Special Purpose Company (SPC) is usually started, which will run the power plant and sell the electricity to the utility. The company also functions as a kind of buffer in case the project fails.

The model that emerged in the late 1980s still applies today. One difference now, though, is that the projects have become harder to realise due to the increasingly stringent nature of the project requirements. Today, investors carry out lengthy due diligence processes and demand lots of documentation and assessments before financial closure. The financial crisis has made banks and other financiers even more cautious than before.

“The interesting thing is that the environmental and social requirements today come from the financers, and not necessarily from the legislation in the country where the power plant is built. If you print the environmental requirements set by the banks, you will get a ten centimetre thick stack of paper. All the documentation can be four shelf meters long”, says Strand.

Previously, there was rarely any social dimension in the projects. Today, however, these requirements are even more detailed than the environmental ones. Social issues can, for example, be about how the power plant affects the way children living in the area go to school.

All this leads to lengthy time-consuming investigations. According to Terje Gresslien, you never know for sure until the day of financial closure if it was worth your while. That being said, projects are carefully evaluated from the start and throughout the process.

“The first question you should ask when considering a potential project is whether there’s a need for the power. In sub-Saharan Africa, where we mostly operate, the answer is typically yes. The second question is whether they can pay for the power, that is, what is the long-term sustainability of the project? Another important thing to look into is whether there is proper legislation in the country. We also start negotiations with some lenders at a very early stage, and depending on how they evaluate the project, we might simply stop it there”, says Gresslien. 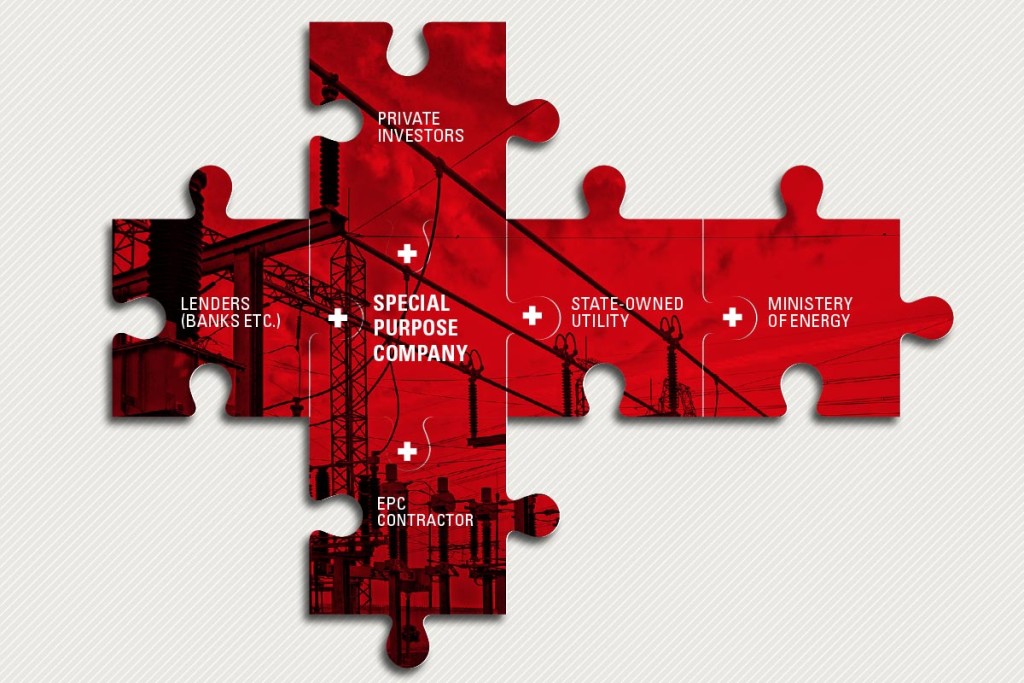 Even when the project is considered worth starting, things can still go wrong in the years that follow. One of the biggest risks is the political one.

“The appetite for realising a project can disappear after elections have been held. Another typical scenario is that the IMF can impose borrowing limitations on a country, if it has lots of other debts as well.”

The whole funding process can typically take five years or even longer. This is due to the large number of parties involved, which makes it particularly challenging.

“There are a lot of simultaneous negotiations going on all the time. One piece falling into place can affect all the other pieces. The biggest challenge in any project is to allocate the risks and rewards between all the parties”, Gresslien explains.

Considering that a typical project is worth approximately 400 million euros, it is perhaps little wonder that financing a power plant is such a complex business. Although there is no shortage of either investors or potential projects available, the challenge is to find the projects which can be materialised and start earning a return within a reasonable time.

According to Clas-Eirik Strand, it is natural to feel frustrated from time to time when working in the field.

“You have to be constantly paranoid in order to succeed. At the same time, this job is very rewarding and varied; you get to see the world and meet a lot of different people.”

According to Terje Gresslien, the job requires a lot of patience. However, you sometimes have to be impatient to make things move forwards. Like Strand, he thinks it is an extremely interesting and meaningful field to work in.

“Electricity is such an important part of any developing countries’ ability to grow. There are still a lot of people in the world who don’t have access to power. Nothing beats the feeling when you finally reach the financial closure.”